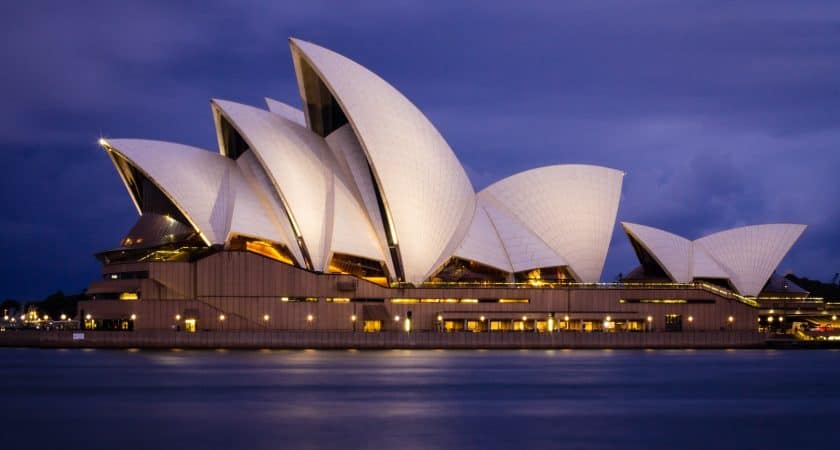 The Sydney Opera House was designed by Danish architect Jørn Utzon. Construction began in 1957 and the building opened on 20 October 1973, finally being officially completed in 1973. Utzon won a limited competition for the design of an opera house, beating out 235 other entries from 29 countries. The seven year construction period is said to be “the longest ever” to have been undertaken with no interruption or delay.

The building’s architecture and design

Austin Bridge and Associates, the company that employed Utzon, was given a contract to build the opera house.

Utzon’s design is seen as one of the great achievements of 20th century architecture in Sydney. With its soaring white sails, it is an iconic symbol for both Australia and New South Wales. The building looks like waves overtaking each other on a beach; another interpretation suggests they represent ships sailing towards Sydney Harbour or entering Botany Bay at dusk with their lights blazing confetti-like into the sky above them.

Why it was built in Sydney?

A big question for many people is “Why did they build Sydney Opera House?” In the 1960s, it was clear that Australia needed an iconic building to reinforce its international cultural identity. The location of Sydney’s harbour made it perfect as a site, and this ambitious project became one of the most famous buildings in the world.

Sydney Opera House was also built to provide a venue for the Sydney Symphony Orchestra, opera and ballet companies, as well as many other performances. For 40 years it has become one of Australia’s most popular tourist destinations with over six million people attending each year from more than 50 countries around the world.

What is inside the opera house?

The Sydney Opera House is the main venue for opera and ballet in Australia. It has a seating capacity of 2000, with further standing room on the ground floor. The interior’s design was not complete until 1998 when Utzon himself finally finished it (with some help).

The interior of the opera house is a world-renowned piece of architecture in its own right, with magnificent curved staircases and sweeping hallways. It’s an incredible building that features some very unique architectural elements – take for example the ceiling which appears to be turned upside down (known as ‘sagging’) or the stairs inside which offer no support due to their lack of vertical rails. The Sydney Opera House has been called both beautiful and ugly, but regardless it remains one of Australia’s most iconic structures.

How to get there by bus, train, or car?

Bus: Take route 500 from Circular Quay to Pyrmont Bay Wharf for a quick ride that takes less than 20 minutes with minimal stops along the way. For those who are on-the-go, you could also take route 700 which travels directly through Central Station station (which will save time) but it does have more stops throughout its journey so this may not be ideal if you’re looking for a quick ride. If you’re with a group you may look for coaching services.

Train: The train is the most direct way to get to your destination, taking you from Central Station station right into the heart of Sydney’s busy CBD and then onto Pyrmont Bay Wharf which sits close by the Opera House. Trains leave about every ten minutes during peak times with trains departing hourly later at night and on weekends so there should be an easy time slot for you to take advantage of but make sure that if you are planning on bringing luggage or other items with you on public transport, it must fit comfortably in a locker (the cost will vary depending) or underneath your seat. Bring coins as well because ticket machines only accept notes – no coins can be used!

Car: Parking near the Opera House is one of its biggest downsides, but if you are willing to take a little extra time and expense at the beginning, it will save some headache later. Parking near Pyrmont Bay Wharf costs about $40 per day while parking on George Street can cost up to $80 per hour with prices varying depending on where you stay in Sydney – so be sure that before you park your car for any length of time elsewhere, check out how much it would set you back to do so at said location first!

It’s worth knowing that all three modes of transport come with their own pros and cons. The bus is quick but has limited space along the way whereas trains offer ample seating as well as an easy route into the city but can be overcrowded during peak times. With a car, you have greater control over your own time and space but parking in Sydney is an absolute nightmare to navigate around.

The most important thing to remember with any transport option is that it’s not just the physical distance covered but also how much time and money you are willing to spend on the journey.